Elphael, Brace of the Haligtree

I am Malenia. Blade of Miquella. And I have never known defeat.

Malenia the Severed was a demigod and Empyrean who warred with her siblings for control of the Great Runes.

Malenia was born the child of Queen Marika and her second husband, the Elden Lord Radagon. She had a twin by the name of Miquella. Both Malenia and Miquella were born as Empyreans, meaning they had the potential to one day replace their mother as the god of a new age. But since Radagon and Marika were in fact the same person, Malenia and Miquella were born cursed. Malenia was afflicted with the Scarlet Rot, which ravaged her from within and would cost her several limbs, while Miquella was cursed with eternal childhood, unable to ever grow into adulthood. At some point, Malenia encountered a blind swordsman who had sealed away an Outer God of Rot. The swordsman became her master, and trained her in the ways of the blade. Malenia would eventually become a warrior without peer.

Malenia and Miquella were close, and Malenia would become her brother's sworn blade and protector, while Miquella worked tirelessly to try and undo the curses they had both been born into. While unable to find a cure for his sister, Miquella designed a needle of unalloyed gold that could keep the Scarlet Rot ravaging Malenia's body at bay.

After the Shattering, Malenia and Miquella both claimed shards of the broken Elden Ring. During the wars between the demigods which followed the Shattering, Malenia led an army that marched south from the Haligtree. Malenia won many battles, even humbling fellow demigod and shardbearer Godrick the Grafted, who groveled at her feet for mercy. She attracted loyal servants like her Cleanrot Knights, as well as worshippers, who believed her a goddess.

Malenia and her half-brother Radahn would eventually be the last two demigods left standing in the conflict. Their forces clashed in the Caelid Wilds, and the two fought a bitter duel for supremacy. Malenia was unable to overcome her mighty half-brother with skill alone, and in desperation unleashed the Scarlet Rot within her. The blooming of the Scarlet Rot devastated Caelid, leaving it a rotting wasteland, and caused Radahn to rapidly degenerate, losing his wits and cursing him to wander the battlefield as a mindless beast, feasting on the bodies of friend and foe alike.

Malenia herself was not unaffected. Unleashing the Scarlet Rot left her in a coma. She was rescued by one of her Cleanrot Knights, Finlay, and brought to the Haligtree to await her brother's rebirth, as he had encased himself within the Haligtree in an effort to reverse his curse. However, during Malenia's slumber, Miquella was ripped from the womb of the tree by Mohg, Lord of Blood before he could emerge from his cocoon.

While Malenia slept, the Scarlet Rot seeped out from her and began infecting the Haligtree. When she had blossomed in Caelid, she had inadvertently birthed the Kindred of Rot, who worshipped her as a goddess and hoped to cause her to bloom once again, believing that she would usher in a new age of rot. Malenia's slumber was eventually disturbed by a Tarnished champion, who found their way to the roots of the Haligtree. The two fought, and Malenia finally met her match and suffered her first true defeat. However, rather than surrender, Malenia gave in to the Scarlet Rot and blossomed yet again, reborn as a nascent goddess. She unleashed her full fury against the invader, but would fall short yet again, her dying words an apology to her vanished brother.

Malenia is a two phase boss fight in Elden Ring found in Elphael, Brace of the Haligtree. Phase one consists of Malenia, Blade of Miquella and Phase two is Malenia, Goddess of Rot. In both phases, Malenia will regenerate health upon landing attacks on the player or any of their summons, even if the attack is blocked.

In Phase one, Malenia will utilize a lever mechanism in her prosthetic right forearm to wield her blade, the Hand of Malenia, with greater freedom than the player is allowed.

Most of her regular sword attacks can be parried, however she will bounce off twice before getting stunned for a critical riposte each time.

Some of her moves grant her hyper-armor, meaning she can't be stunned out of those attacks except by Frostbite and Bleed procs.

When getting stunlocked, she may do a couple of quick pirouette-jumps away from the player to reposition herself. Alternatively, she can also cancel this after the first pirouette jump and attempt to counterattack.

Malenia will sidestep most projectiles, but not jumping attacks from bows.

She has an incredibly versatile set of attacks:

When initiating phase 2, she will erupt in a scarlet bloom as she did in her battle with Starscourge Radahn , shedding her armor and revealing her skin to be cracked and blistered by Scarlet Rot, as well as growing a pair of wings made from Aeonian Butterflies.

She will always lead by casting Scarlet Aeonia, blanketing the battlefield with long, flowing flower petals that inflict Scarlet Rot.

She may also rise up into the air and summon spirits that repeatedly assault the player before lunging towards them herself. She will also still do the Waterflow Dance flurry attack, which now also inflicts Scarlet Rot.

In addition, she gains new combo extension options with phase 2. There is a chance that she will follow-up on some of her usual combo-enders by jumping up and then slamming her sword down into the ground again, causing a delayed rot explosion. She also gains the ability to cancel some of her moves into the triple-slash combo, primarily after landing from dash-stabs. She becomes more aggressive in general and begins to use her jump-kick much more frequently than the telegraphed sidesteps.

Drops 480,000 Runes and Remembrance of the Rot Goddess when defeated. 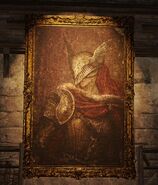 a portrait of Malenia in the Shaded Castle
Community content is available under CC-BY-SA unless otherwise noted.
Advertisement