Conqueror of the Stars

"The Red Lion General wielded gravitational powers which he learned in Selia during his younger days. All so he would never have to abandon his beloved but scrawny steed."

, Remembrance of the Starscourge
”

General Radahn was the most powerful demigod and warred with his siblings for control of the Great Runes.

Radahn was the son of Queen Rennala and Radagon, and mightiest of the demigods. So great were Radahn's powers that he commanded the very stars and held them in place with his powers over gravity, earning the moniker of 'Starscourge'. Those sworn to his lordship carried with them a distinctively red insignia, and Redmane Castle was his personal fortress from which he oversaw his domain within the wilds of Caelid.

Radahn was born the son of Radagon, a champion of the Erdtree, and Queen Rennala, ruler of the Academy of Raya Lucaria. He had at least two siblings, Lunar Princess Ranni and Praetor Rykard. Radahn inherited his father's flaming red hair, and was fond of its heroic implications. From a young age, Radahn was enamored with the Elden Lord Godfrey. Attempting to emulate his idol, Radahn adorned his armor with lions, the symbol of Godfrey.

Radahn grew massive in size, eventually outgrowing his scrawny but beloved steed. Loath to abandon his horse, Radahn studied gravitational magic in Sellia under a master who was an Alabaster Lord. Mastering gravitational magic allowed Radahn to manipulate the forces of gravity, and to challenge the very stars themselves. Radahn conquered the stars, saving Sellia in the process, using his vast gravitational powers to hold them in place, earning him the moniker of "Starscourge".

At some point, the first Elden Lord, Godfrey, was robbed of grace and hounded from the Lands Between. Radahn's father, Radagon, left to become Queen Marika's new consort and the second Elden Lord. Radahn and his siblings were thus raised to demigods by their new step-mother, Marika.

After the Night of Black Knives, which saw the assassination of Marika's firstborn Godwyn the Golden, the first recorded death of a demigod, a disillusioned Marika shattered the Elden Ring.

This would lead to the Shattering, a war between Marika's demigod descendants, each seeking to become the new ruler of the Lands Between. From his stronghold of Redmane Castle in the Caelid wilds, Radahn led his armies against the forces of the other demigods, until only he and his half-sister Malenia were left standing. The two fought to a stalemate, which ended when Malenia unleashed her Scarlet Rot. Radahn's might and status as a demigod mattered little; the Scarlet Rot consumed Radahn from the inside, ate away his psyche, and cursed him to roam as a mindless beast who devoured the flesh of friend and foe alike.

Radahn, still clad in his armor, still wielding his mighty armaments, and still atop his undersized steed now roamed the sandy, wartorn dunes on Caelid's southeastern coasts. Without their commander, the Lordsworn army of Radahn occupy ever-diminishing territories throughout the region, the containment of the Scarlet Rot now a grim uncertainty.

As he is still in possession of his Great Rune, a shard of the Elden Ring, a festival has been organized by his men in Castle Redmane; a gathering of mighty warriors who might finally put the General out of his misery, and perhaps claim his Rune for themselves.

The festival is a success, and Radahn is freed from his tortured existence. This causes the very stars he had once conquered to come crashing down upon the Lands Between. A crater made by the falling stars can be found east of Fort Haight, deep in the Mistwood Ruins, leading to Nokron, Eternal City. 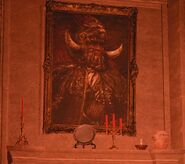 A portrait of Radahn in the Volcano Manor
Community content is available under CC-BY-SA unless otherwise noted.
Advertisement